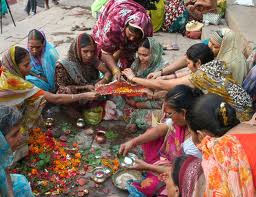 The Sanskrit word Ekadasi literally means eleven. Ekadasi is the eleventh of the fifteen-day lunar month. In one of the lunar months (called the light month) the moon grows from new moon to full moon and in the following lunar month (called dark month) it diminishes from full moon to no-moon. Thus every calendar (solar) month there are two Ekadasis, the light Ekadasi that occurs on the eleventh day of the waxing moon, and the dark Ekadasi that occurs on the eleventh day of the waning moon. It is recommended that all Vaisnavas should fast on this day of Ekadasi. Such austerity will be greatly beneficial for their devotional life.

In the fourteenth chapter of Padma Purana, in the section named Kriya-sagara-sara, Srila Vyasadeva explains the origin of Ekadasi to Sage Jaimini as follows:

At the beginning of the material creation, the Supreme Lord, for the purpose of punishing the sinful human beings, created a personality whose form was the embodiment of sin (Papapurusha). The different limbs of this personality were constructed of the various sinful activities. In order to control Papapurusha, the personality known as Yamaraja came into existence along with the different hellish planetary systems. Those living entities that are very sinful are sent after death to Yamaraja, who will in turn, according to their sins, send them to a hellish region to suffer.

The living entities, according to their karmic activities thus began to enjoy or suffer. Seeing so many souls suffer in hellish condition, the compassionate Lord began to feel sorry for them. In order to help them He manifested from His own form the deity of the lunar day Ekadasi. Thus, Ekadasi is the personification of the vow to fast on the eleventh day of the lunar month. Therefore Ekadasi is the selfsame form of the Supreme Lord Vishnu. Sri Ekadasi is the utmost pious activity and is situated at the head among all vows.

Afterwards the different sinful living entities began to follow the vow of Ekadasi and were then elevated quickly to the abode of Vaikuntha. Following the ascension of Sri Ekadasi, Papapurusha (sin personified) gradually saw that his own existence was being threatened. He approached Lord Vishnu praying that, ‘O Lord, I am your created progeny, and it is through me that you wanted distress given to the living entities who are very sinful. But now, by the influence of Sri Ekadasi, I have become all but destroyed. You please save me from the fear of Ekadasi. No type of pious activity can bind me. But Ekadasi only, being Your own manifested form, can impede me. I cannot find a place where I can be free from fear of Sri Ekadasi. Oh my Master! I am a product of Your creation, so therefore very mercifully direct me to a place where I can reside fearlessly.’

After this, Lord Vishnu, observing the condition of the Papapurusha began to speak thus: ‘Oh Papapurusha! Rise up! Don’t lament any longer. Just listen, and I’ll tell you where you can stay on the auspicious lunar day of Ekadasi. On the day of Ekadasi, which is the benefactor of the three worlds, you can take shelter of foodstuff in the form of grains. There is no reason to worry about this any more, because My form as Sri Ekadasi Devi will no longer impede you.’ After giving direction to the Papapurusha, the Supreme Lord Vishnu disappeared and the Papapurusha returned to the performance of his own activities. According to the instructions of Lord Vishnu, every kind of sinful activity that can be found in the material world takes its residence in this place of foodstuff (grains). Therefore those persons who are serious about the ultimate benefit for the soul will never eat grains on the Ekadasi day.

All Vedic scriptures thus strongly recommend observing complete fast on the day of Ekadasi (without drinking water). Every one from the age of eight to eighty, irrespective of varna-ashram, gender, or any material consideration is recommended to fast on this day to make spiritual progress.

For those who cannot perform the austerity of complete fasting, it is recommended that one can follow Ekadasi by eating once a day at midday, or eating once a day in the evening. However under no conditions should one eat grains in any form on this day.

So, for devotees, fasting on Ekadasi is a means to progress on their path of sadhana-bhakti. The process of fasting is purifying to the consciousness and it frees up the devotee from so many material considerations. Since devotional service performed on this day is several times more effective, devotees like to engage themselves as much as possible in chanting, kirtan, discussing the pastimes of the Lord and performing other forms of devotional service.

Srila Prabhupada recommended that devotees should try and chant at least twenty-five rounds on this day, read about the Lord pastimes and minimize material affairs. However, understanding that devotees who are already fully engaged in active service of the Lord (like book distribution, preaching etc.) he made some concessions, like eating and drinking liquids in the day as long as there is no grains in them.

In the Bhakti-sandarbha, by Srila Jiva Gosvami, there is a quotation from the Skanda Purana admonishing that a person who eats grains on Ekadasi becomes a murderer of his mother, father, brother and spiritual master, and even if he is elevated to a Vaikuntha planet, he falls down. It is strictly forbidden for one to accept any kind of grain on Ekadasi, even if it is offered to Lord Vishnu.

In the Brahma-vaivarta Purana it is said that one who observes fasting on Ekadasi day is freed from all kinds of reactions to sinful activities and advances in pious life. The basic principle is not just to fast, but to increase one’s faith and love for Govinda, or Krishna. The real reason for observing fast on Ekadasi is to minimize the demands of the body and to engage our time in the service of the Lord by chanting or performing similar service. The best thing to do on fasting days is to remember the pastimes of Govinda and to hear His holy name constantly. 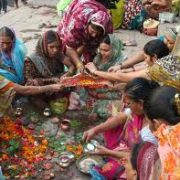 How to Fast on Ekadasi
16 replies

How to Fast on Ekadasi