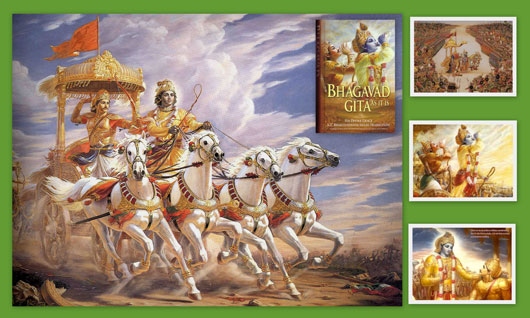 Bhagavad Gita, the Gitopanisad, is a transcendental literature, is also the essence of all the Upanisads, is just like cow and Lord Shri Krishna is like the cowherd boy who is milking this cow. Arjuna is like the calf and pure devotees are to drink the nectarian milk of Bhagavad Gita.

Bhagavad Gita is one of the sections of the Bhishma Parva of the Mahabharata, world’s largest of all scriptures. Bhagavad Gita is the song of the Supreme Lord Krishna. This timeless treatise spoken by the Lord, has been acknowledged the world over for its unfathomable depth and replete with practical instructions. The world’s foremost western and eastern philosophers have paid rich tributes for the priceless wisdom that it offers to mankind. A discerning person with just contemplation will notice that all the instructions contained in the Bhagavad Gita is also contained in all other religious scriptures of the world, but there is higher knowledge, which is not found in any other book of knowledge.

The Bhagavad Gita AS IT IS Audiobook

(The best audio version of the Bhagavad Gita, the ancient Hindu spiritual text, with music!)

Subject Matter Of The Bhagavad Gita

The subject matter of Bhagavad Gita deals with

What Do We Learn From Bhagavad Gita

What Is The Purpose Of Bhagavad Gita?

Who Are Eligible To Read Bhagavad Gita?

Why One Should Have Bhagavad Gita AS-IT-IS In Home?

Unlike other presentations and translations Srila Prabhupada presents the Bhagavad Gita as it is, free from personal speculations and interpretations. He focuses our attention on what Krishna is actually teaching in the Gita. For all these reasons Bhagavad Gita to be enlightening and conducive to personal transformation.

In this present age, people are very much eager to have one scripture, one God, one religion and one occupation. So let there be one scripture for the whole world- Bhagavad Gita, one God-Lord Shri Krishna, One mantra- Hare Krishna Hare Krishna Krishna Krishna Hare Hare; Hare Ram Hare Ram Ram Ram Hare Hare,And let there be one work- the service to the Supreme Personality of Godhead.